From Luxor: Private Tour to Abu Simbel Temple – philae temple -The high Dam And The unfinished obelisk By Train

When you book with an account, you will be able to track your payment status, track the confirmation and you can also rate the tour after you finished the tour.
Sign Up
523

Explore the most famous monuments in Aswan

Take the chance and visit Aswan which was known the land of gold as it was a big treasure for the kings of Nubia. Visit Aswan to enjoy its admirable heritage on one day trip on which you can visit (Abu Simbel temples- philae temple – The high Dam – Lake Nasser – The obelisk ).

Your Hotel in Luxor

Marvel at the wonders of the Abu Simbel temples

Explore one of the most famous monuments in Egypt

Skip the entrance line and go straight into the complex

Benefit from a professional guide and included hotel transfers

Discover some of the most fascinating historical spots of ancient Egypt

Discover some of the most fascinating historical spots of ancient Egypt

Cruise down the River Nile on a motorboat, taking in the beautiful scenery.

Explore the Temple of Queen Nefertari

Roam around the small and large temple complexes The complex is part of the UNESCO World Heritage Site. known as the “Nubian Monuments” which run from Abu Simbel downriver to Philae.

The Aswan Dam, or more specifically since the 1960s. the Aswan High Dam, is the world’s largest embankment dam. built across the Nile in Aswan, Egypt. The unfinished obelisk is the largest known ancient obelisk. and is located in the northern region of the stone quarries of ancient Egypt in Aswan, Egypt.

Description of the trip:From Luxor: Private Tour to Abu Simbel Temple-philae temple – The high Dam– The obelisk ). by train 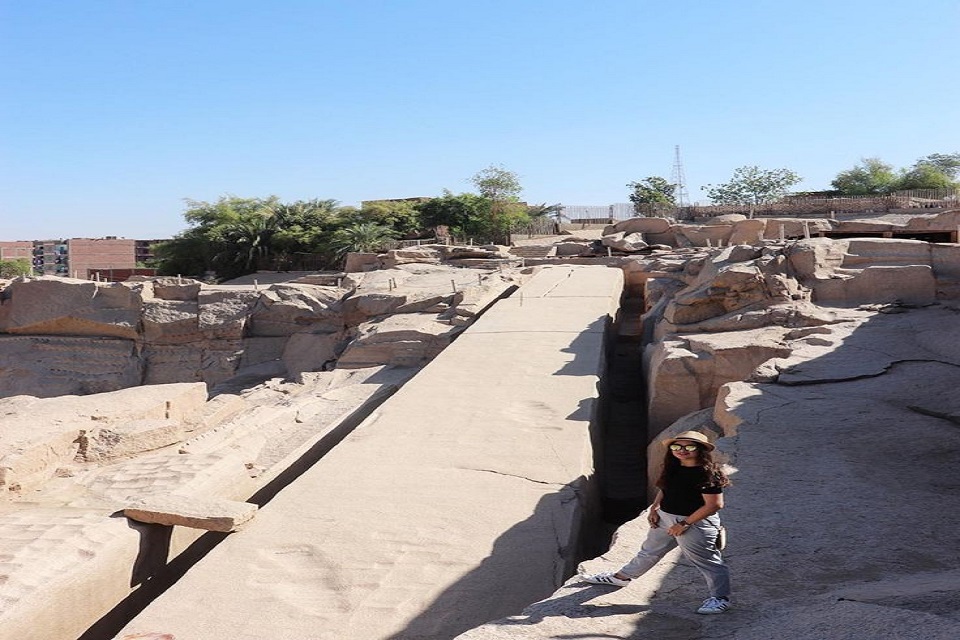 After picking you up from your hotel in Luxor early in the morning. in an air-conditioned car. and then going to the train station to take the train to Aswan at 4 am. the driver will give you some snacks (cola – a bottle of water – chips). as soon as you get there At about 7:15 a.m., when you arrive at Abu Simbel. our specialist guide will be waiting for you to explain the temple. He discovered two of the most famous temples in Egypt. one of them dedicated to Ramses II and the other to his favorite wife Nefertari.

Upon reaching the site and exploring the temples that is constructe in the 13th century BC. Enjoy the giant facade of the Temple of Ramses II. which represents four huge seated statues of Ramses. Enter inside the temple through a man-made rock cave that leads to a series of halls and rooms.

After the end of your tour, you will go to lunch in a local restaurant.

Then you will go to visit the philae Temple.Egypt’s ancient center for the cult of Isis. the Temples of Philaeis veneratefrom the Pharaonic era through the Greek. Roman, .

Then you will visit the High Dam.The Aswan Dam, or more specifically since the 1960s.the Aswan High Dam, is an embankment dam built across the Nile in Aswan, Egypt, between 1960 and 1970.

Finally you will visit unfinished obelisk Three sides of the shaft. nearly 42m long, is complete except for the inscriptions. At 1168 tonnes, the completed obelisk.

After that, you will go to the train station to take the train. at 7 pm to return to Luxor and upon arrival. our representative will be waiting for you to take you to your hotel in Luxor. It is a beautiful and enjoyable trip and the service is great when I was feeling a headache and the guide helped me and gave me medicine and I was well, thanks to the beautiful company for issuing such a trip

the team was very perfect and kind they know what to do in an emergency as I had my medicine which should stay in cold condition, therefore, they gave me a colder for the medicine which makes me liked that so that I recommend this strongly as the tour was very amazing